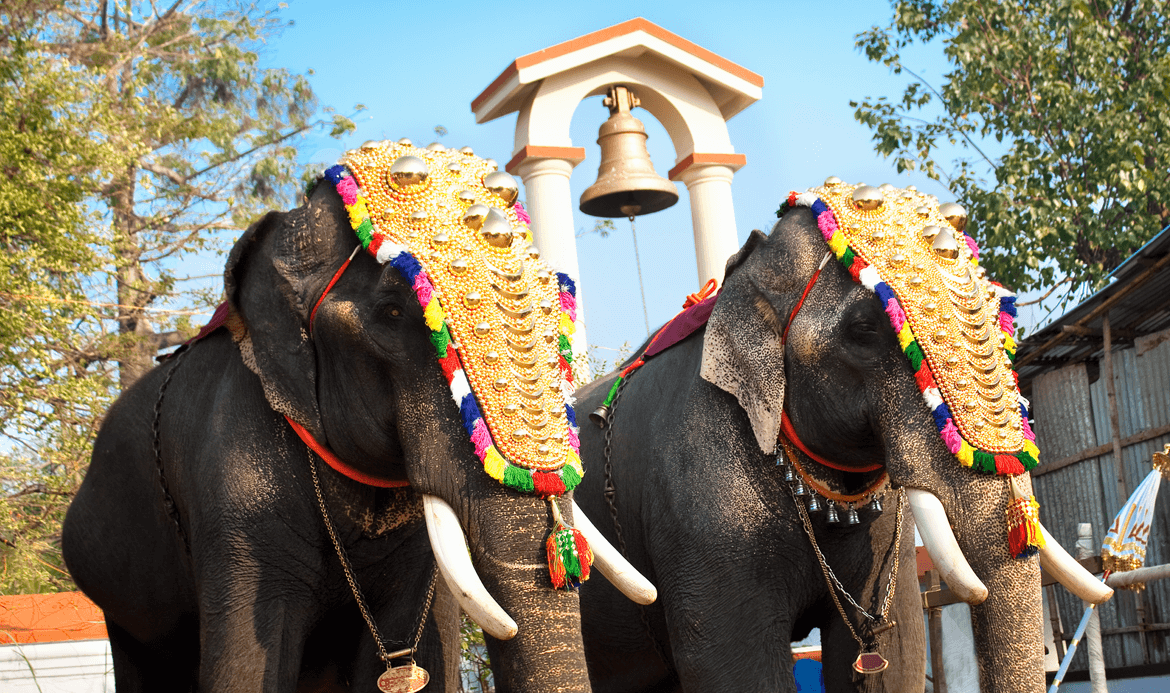 In Kerala, festivals form a part of each temple’s annual rituals. These festivals are mostly a tribute to the presiding god of the temple, who is believed to emerge from the temple each year. The city of Thrissur in Kerala is a festival hotspot and Trissur Pooram is one festival that outranks all the others. The colourful elephant procession marks this temple festival, which is one of the most strikingly colourful festivals in Kerala. The festival got its name from the city of Thrissur where the festival takes place and the word ‘Pooram’, which means ‘a group or a meeting’. The festival takes place on Pooram day as per the Malayalam calendar. The moon rises with the Pooram star on this day.

Trissur Pooram was introduced almost 200 years ago and brings together people from all religions. Conducted on a grand-scale, this exotic festival is a treat to the senses. The main deity parade in the temple grounds comprise of two teams of 15 beautifully caparisoned elephants. The procession features stunning bejeweled elephants that bear a peacock-fan carrier, an umbrella holder and a yak-tail flywhisk wielder. They are accompanied by a temple troupe comprising of drummers, percussionists and other musicians who play traditional music. The parasols are exchanged among the men standing on the elephants in a ceremony known as ‘Kudamattom’ while the ‘pandimelam’ (temple orchestra) plays along. Gods from surroundings temples are brought with elaborate processions to pay their respects to Lord Shiva, the presiding temple God. A flag hoisting ceremony and a wonderful show of pyrotechnics are part of the elaborate festival that continues till the wee hours of the next morning.

The festival is a popular event in Kerala that brings together devotees, tourists and onlookers from all parts of Kerala, India and from across the world. This is one festival that is not bound by any religion and you should see it once in your lifetime. Seeing an elephant and receiving the touch of its trunk is considered an esteemed spiritual experience, making it yet another reason to not miss this festival!