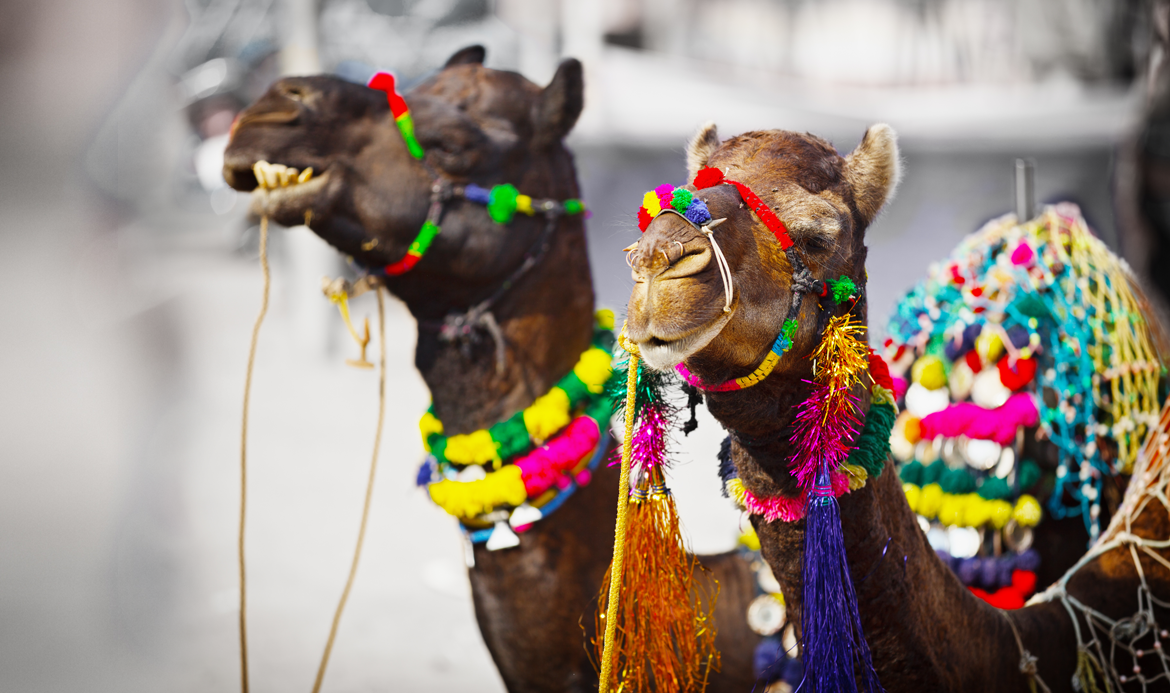 Rajasthan is a state of colours, vibrance, tradition and a lot of culture. And during the months of any festival or fair, it gives the phrase, ‘a riot of colours’, a whole new meaning! The month of November sees the onset of the Pushkar Fair which brings to this small town more than 250,000 people and approximately 50,000 camels.

The Pushkar Mela is a 100 year old annual festival which takes place in the Kartik month of the Hindu calendar. It is celebrated for five days from the day of Kartik Ekadashi to Kartik Poornima. Legend is that on the full moon night of the festival, the Hindu god Lord Brahma created the Pushkar Lake out of nothingness after a holy lotus flower was dropped at the location. Thus, every year during the fair, you will find millions of people swimming in the waters of the lake, hoping to be absolved for all their sins.

The fair started out as an opportunity to buy and sell camels and other livestock, but over the years it has developed into a full-blown tourism extravaganza with hundreds of events beings held throughout the five days, shows by local artisans, hand-made arts and crafts, competitions, games, local delicacies on display and desert safaris organized.

While the fair witnesses every colour there is, the most prominent of them all will have to be various shades of yellows, reds and pinks. Rajasthanis, as a community, prefer wearing bright, noticeable colours in stark contrast to the nature around them. Their women wear beautiful lehenga-cholis and ghaghras with intricate mirror-work and beadwork on them. They carry a long, unstitched cloth with them with a similar pattern as the dress called the dupatta, whereas men usually wear dhoti-kurtas.

The Rajasthani and Gujarati tribes that are the traders at the fair take pride in showcasing their native costumes and participate in the festivities in full regalia. The jewelry the women adorn are examples of exquisite silver and ivory craftsmanship.

The food served at the fair is mostly traditional, like hot pakoras, chickpea curry, puris, jalebis and malpuas. The actual camel trading goes on a lot longer than the four days of the fair and starts almost two weeks in advance of the crowd descending. Camels are sold for up to lakhs of rupees for their ability to be the ships of the desert, give milk and are useful for their hair, bones and skin. There’s even a Camel Beauty Contest held at this annual fair!

There are matka (earthen pot) carrying competitions for women and the men have a variety of contests and competitions to participate in, such as turban tying, best moustache contest, wrestling, etc.

In the evening, the tourists and locals alike can opt for a hot air balloon ride which is offered for all five days and at the end of every evening, a desert safari along the dunes of the Thar desert are an absolute must!