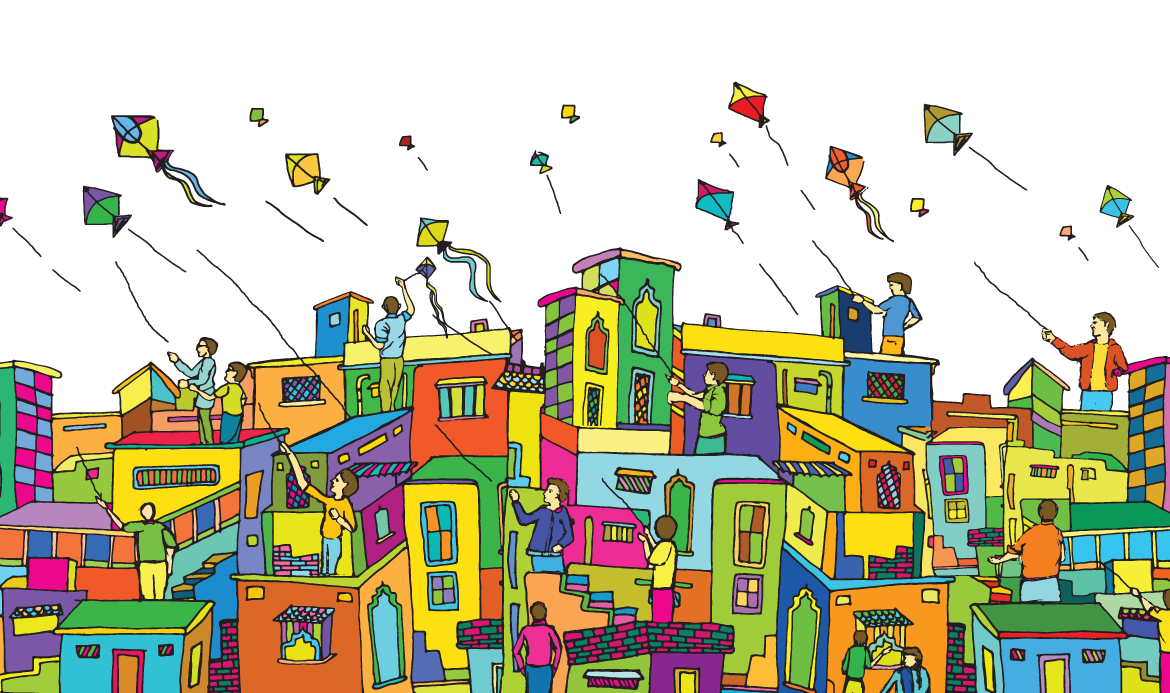 A festival is best experienced at the heart of all the action. A great example of this is Makar Sankranti, also known as Uttarayan – the kite flying festival in Gujarat. In striking contrast to other Hindu festivals that follow the lunar motion, Makar Sankranti follows the movement of the sun. It marks the beginning of the transition of the sun into the zodiac of Capricorn (Makar = Capricorn, Sankranti = transition). This makes it the only festival to fall on the same date each year – January 14th.  It is also symbolic of getting rid of the bad vibes of previous season and the start of a fresh new season. It is a day of festivity all across India. Each region in India celebrates it in myriad ways. In the western parts of India, it is known as ‘Makar Sankranti’ and known by several other names such as ‘Lohri’ in Punjab, ‘Bihu’ in Assam, and ‘Pongal’ in Tamil Nadu.

It is believed that kites first arrived in India through either the Muslim traders from Persia or the Buddhist pilgrims arriving from China in search of sacred texts. More than 1000 years ago, there was a mention of kites in a song composed by Santnambe and several classic miniature paintings of the area depict people flying kites.

The gods who are believed to be in a state of deep slumber for six long months awaken in this period and colourful kites are sent out to the skies to greet them. Another theory behind the practice of flying kites is that by doing so, people receive the benefits of sun exposure. During winter, the body gets infected and the skin also gets dry during this season. When the sun moves in Uttarayana, the rays act as medicine for the whole body.

The markets are filled with colourful kites days before the festival of Makar Sankranti (Uttarayan). The street is filled with people a night before the main Makar Sankranti (Uttarayan) event, choosing their stash for kite flying the next day. Kite flying is also considered a mid-air contest and not just a friendly pass time. All daily activities are stopped for the day and everyone takes to the rooftops and roadways to fly kites and compete with each other. Kites of all shapes and sizes are flown, and the main competition is to battle nearby kite-flyers, cut their strings and bring down their kites. At night, kite fighters send up bright white kites that are seen in the darkness.

From dawn to dusk, the festival is full of fun and is a spectacle to witness!

thank for sharing a such a beautiful information related to sankranti festival. i like Colorful Kite.can you share more information about sankranti with more photographs? i have found one website which is popular for online flower booking where you can find best sankranti gifts
check over here