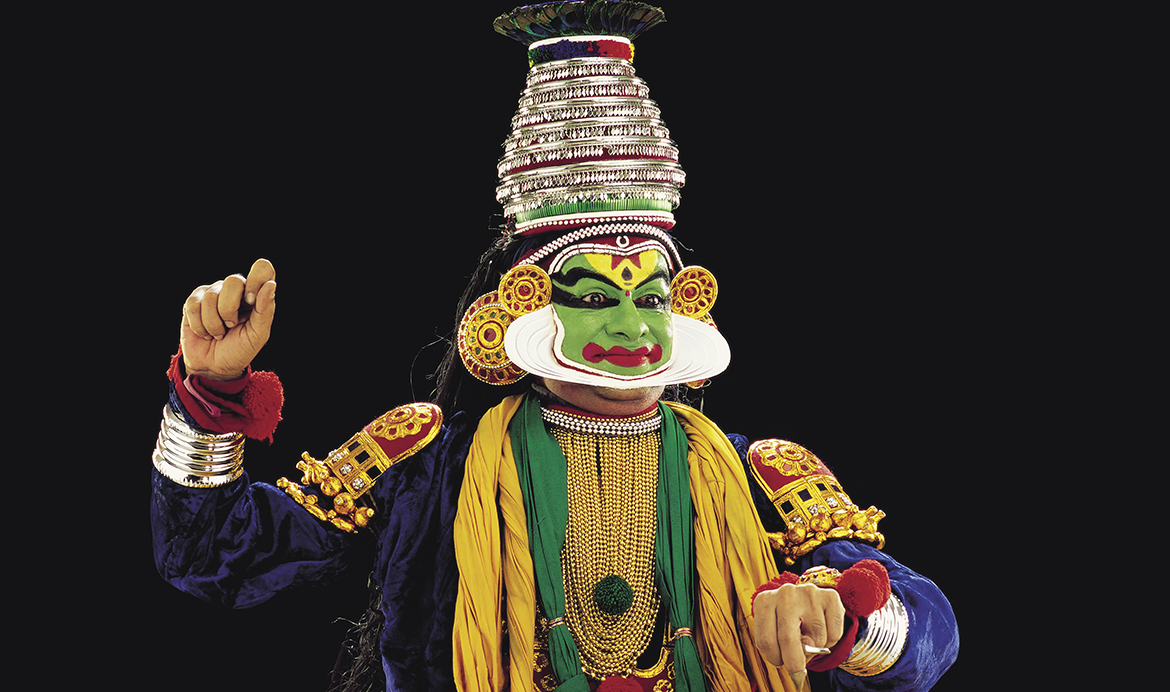 Kerala is known the world over by its own performing art form, the Kathakali. Let us explore this colourful dance form and learn more about its origin and its journey so far.

The word “Katha” means story and “Kali” stands for dance. Kathakali is considered to be a beautiful blend of literature, music, acting, mime, dance and painting. This dance form was earlier confined only to the festival stages in temples.

Its technique is a mix of both Aryan and Dravidian cultures. It derived from various elements and borrowed freely from the dances, ritual performances and dramas associated with the two distinctive cultures.

Kathakali is not more than three to four hundred years old. However, it is interesting to note that its actual roots can be traced to at least 1500 years earlier. The art of Kathakali evolved out of the earlier dance forms such as the Chakiayarkoothu and Koodiyattom in Kerala, the various ritual dances linked with the Bhagavathy cult such as the Thiyyattom, Theyyattom, Mudiyattu and the dances like the Ezhamattukali and Sastrakali and the dance-dramas such as the Krishnanattom and Ramanattom.

The ruler of Calicut in the 17th century by the name Krishnattam penned a poem, Krishnageeti on the life of Lord Krishna and asked it to be performed at the temple. Another ruler of Kottarakara watched this play and was extremely impressed by it. He asked the Zamorin of Calicut to send the same troupe to his kingdom but the latter refused. This enraged the ruler of Kottarakara and he decided to create his own play on the life of Lord Rama called the Ramanattam. It soon gained widespread popularity and the ruler Tampuran of Kottayam turned it into Kathakali. He chose fascinating dramatic plots and enhanced the costumes and makeup so that the facial expressions were highlighted of the dancers. He picked up episodes from the Mahabharata that were more appealing to the audience. He also renamed this dance style calling it Katha- story + kali – act or play. Kathakali is also the only dance form in India with an interesting masculine aspect. It is known by its colourful makeup, grand headgears and elaborate costumes.

The great poet Vallathol started the Kerala Kalamandalam from his own savings and Kathakali achieved global recognition with gurus such as Kunju Kurup. Over the past few years, Kathakali has been undergoing through interesting experiments such as the Japanese art form Kabuki being fused with it for certain stage shows. It is also adapting to the fast-paced lifestyle, with changes in the duration and stories in the performance.