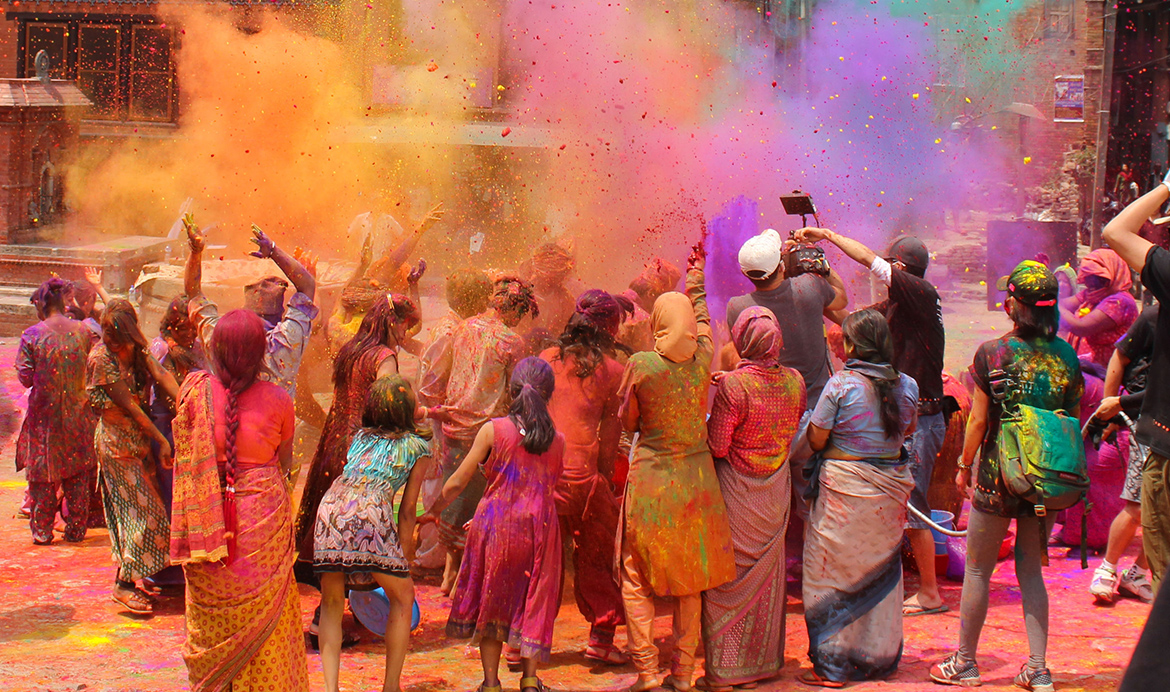 The festival of Holi perfectly demonstrates India’s incredibly flamboyant culture. What started as a ritual by married women for their family’s happiness thousands of years ago is now a full-blown colour carnival biding adieu to winter and welcoming spring. The mythological episode of Vishnu devotee Prahlad coming unharmed out of the fire that burnt the wicked Holika propagates the usual message of good’s triumph over evil through the festivity. Though, it was Lord Krishna’s playful act of applying colours to his beloved Radha and her companions that continues to be the heart of Holi celebrations even today.

From adhering to the thousands of years old traditions to inexhaustible street fun and from heart-warming folk ceremonies to maddening DJ parties, the festival exhibits different characteristics in different regions, each worth experiencing. Choose from the list of the best places to celebrate Holi where you would like to be this year. 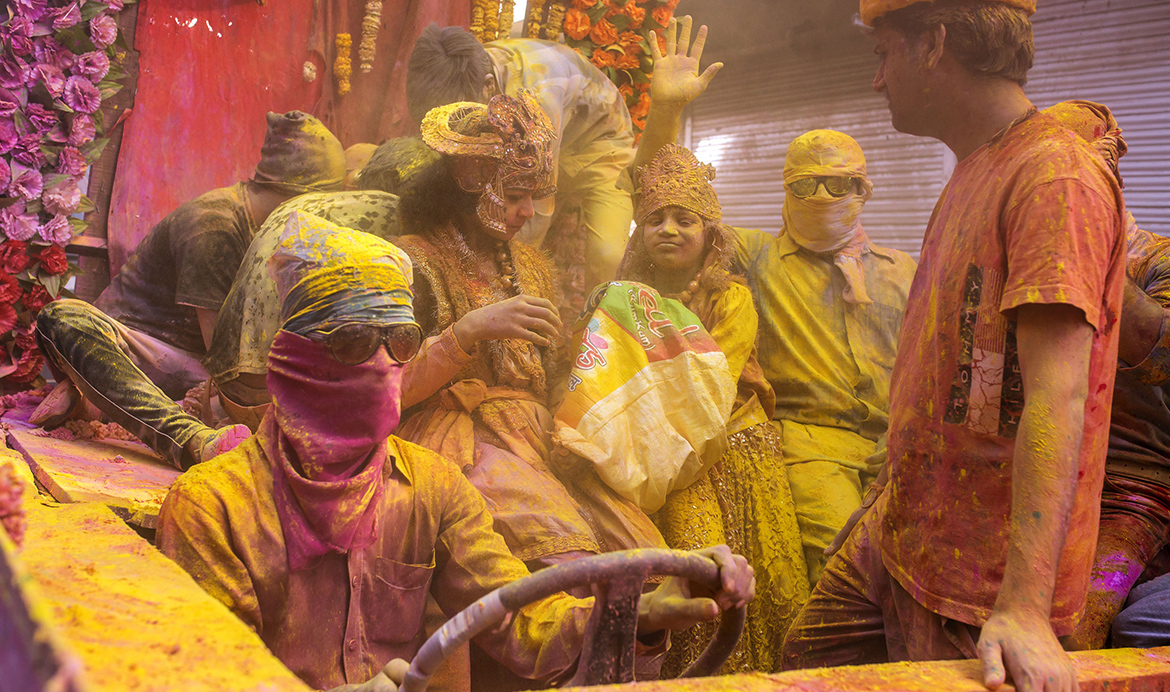 Lord Krishna’s birthplace Mathura and childhood abode Vrindavan indulge into Holi celebrations 40 days before the actual festival. At Dwarkadheesh Temple of Mathura, bounties of colours are thrown over the enthusiastic devotees. However, the most fascinating thing happens at Banke Bihari Temple where buckets of flowers are tossed on the audiences. Other highlights include colourful processions, bhang preparation and the touching widow’s Holi. 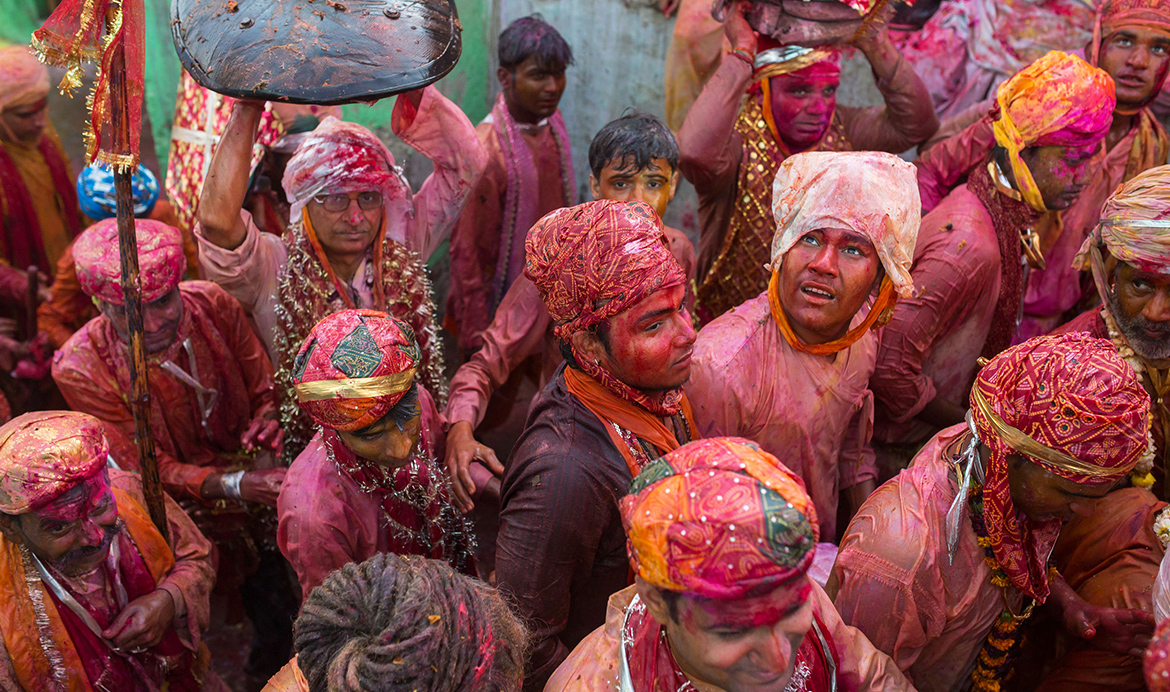 Radha-Krishna’s playful banter at Barsana (Radha’s birthplace) continues till date as men mischievously tease and provoke women who in turn punish them with laths (sticks). The result is a fun-filled mockery in which women chase men with sticks in hand while men try to protect themselves with shields. Other highlights include folk Holi songs sung in the local Braj boli and matka phod tradition in which young boys imitate Krishna’s mischievous act of breaking earthen pots to steal butter. 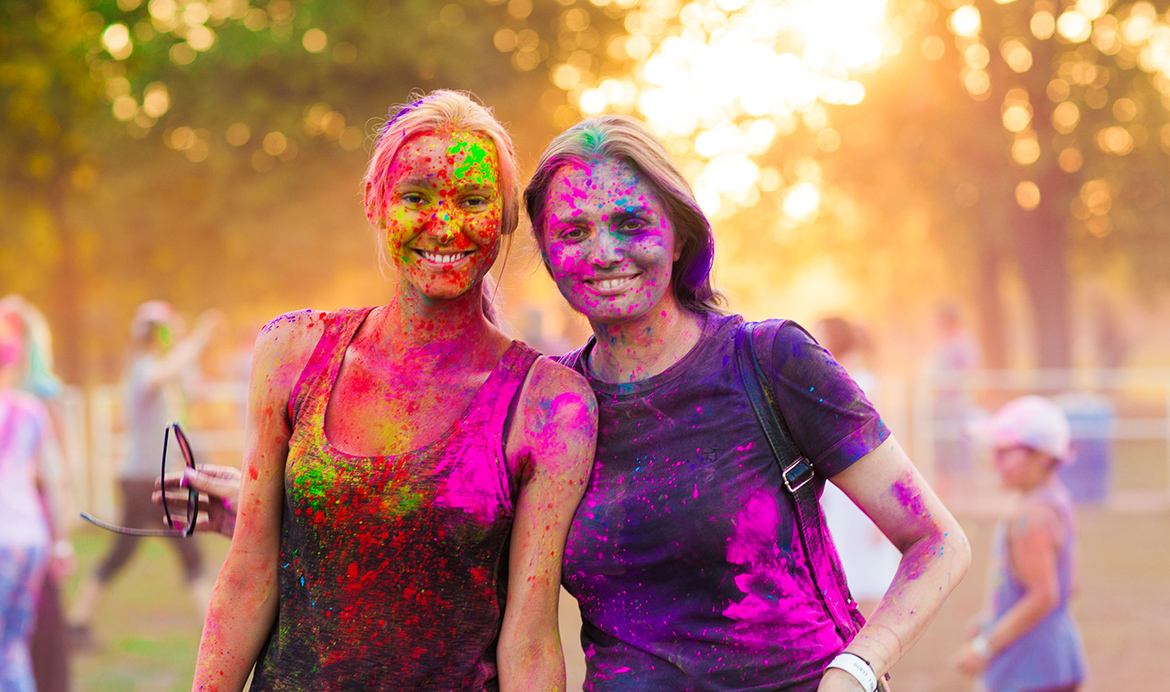 Pleasure finds no bounds in Delhi as dilliwalas take to the streets and participate in the craziest Holi celebrations. Amidst the loud cheers of ‘bura na mano holi hai’, the whole environment seems painted in yellow, blue, green, pink and what not. Water balloons and water guns or pichkaris turn into weapons of mass gratification and you can’t help becoming a part of the gala. Delhi’s Holi is incomplete without the scrumptious street foods. The Holi Moo Festival that summons more than 40 performers from India and abroad adds to the festive mood. 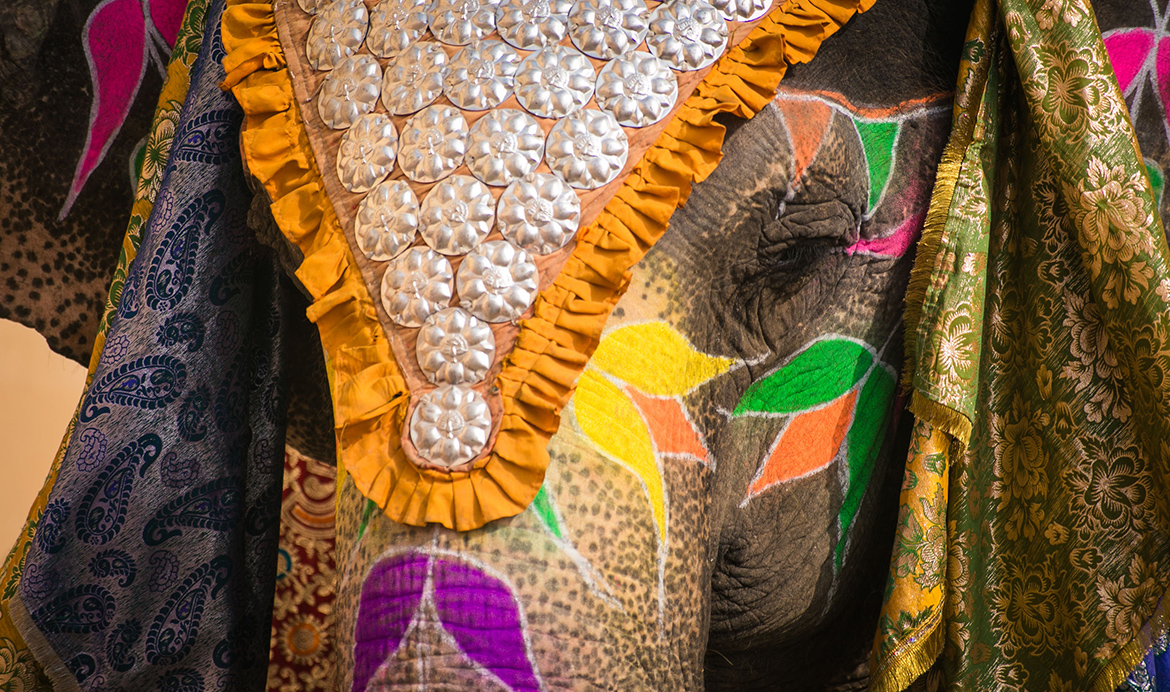 Jaipur, the Pink City and capital of Rajasthan, is so pink that you wonder if the residents choose any other colour as their room paint. However, the royal city breaks the norms and turns multicoloured just on the special day of Holi. Though the popular elephant events (including elephant parades and elephant beauty contests) are no more in practice during the festival, you can choose the EleHoli Fest packages that promise fun activities in the company of elephants. Rajasthan’s authentic folk dance and music and mouth-watering sweets, along with unlimited organic colours, fireworks, puppet shows and more, would keep you entertained throughout. 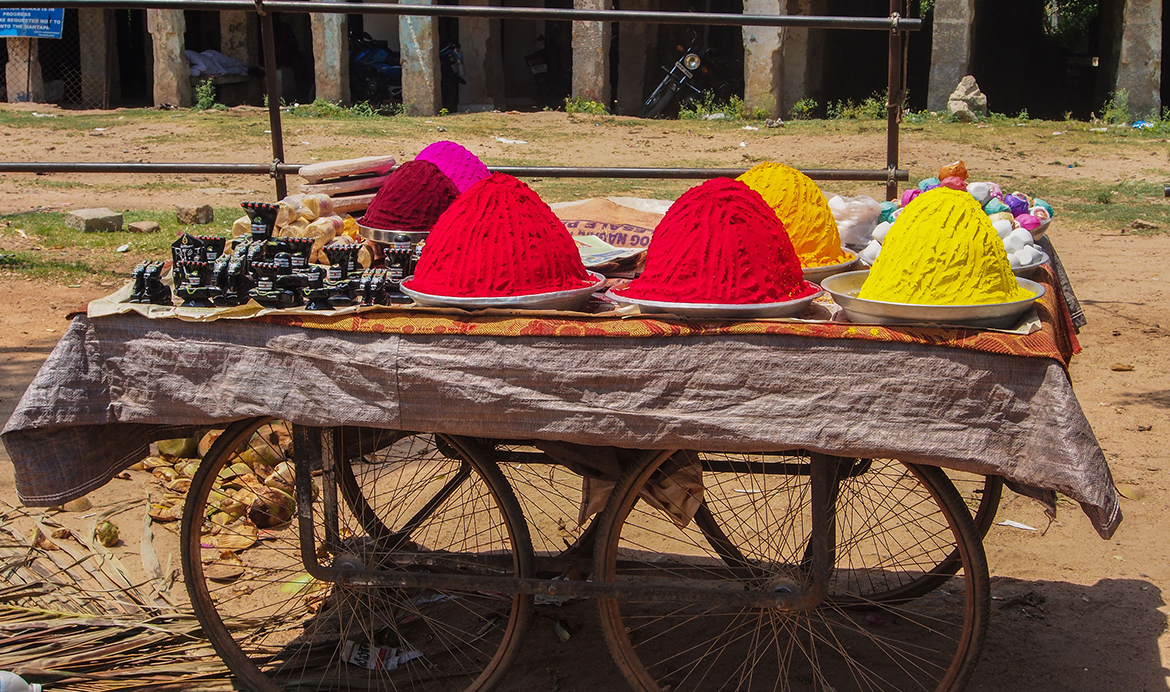 The UNESCO World Heritage Site Hampi boasts of extravagant monuments dating back to Vijayanagara Empire. Usually adhered to South India’s serene profile, the town suddenly turns lively during the 2-day Holi celebrations as people shed their inhibitions and welcome the spring festival with gulal, dance and music. The holy water of Tungabhadra River flaunts peculiar colour combination as people take bath in it after a day full of fun and frolic. Don’t miss the fascinating monuments lit under the full moon sky the eve before Holi. 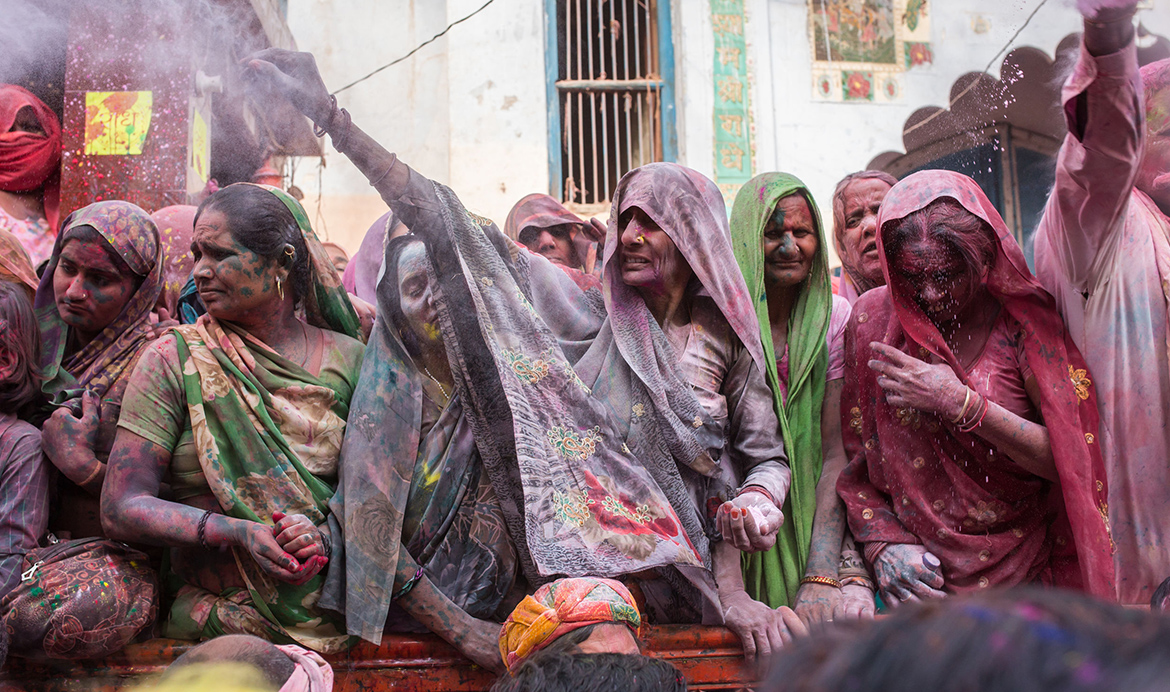 In the Kumaon Region of the state of Uttarakhand, Holi is considered as an opportunity to honour the rich classical music and folk culture passed from one generation to another with great pride. Baithaks (gatherings) are held at homes, temples as well as community centres where ‘holiyars’ sing classical songs to the music of harmonium, tabla and other classical instruments. Mahilas (women) also sing classical songs in their exclusive gatherings. The folk culture can be seen at its best as people dressed in white kurtas, churidars and headgears perform folk dances as a part of Khari Holi. Gujia, the irresistible Holi special sweet, is just not worth missing. 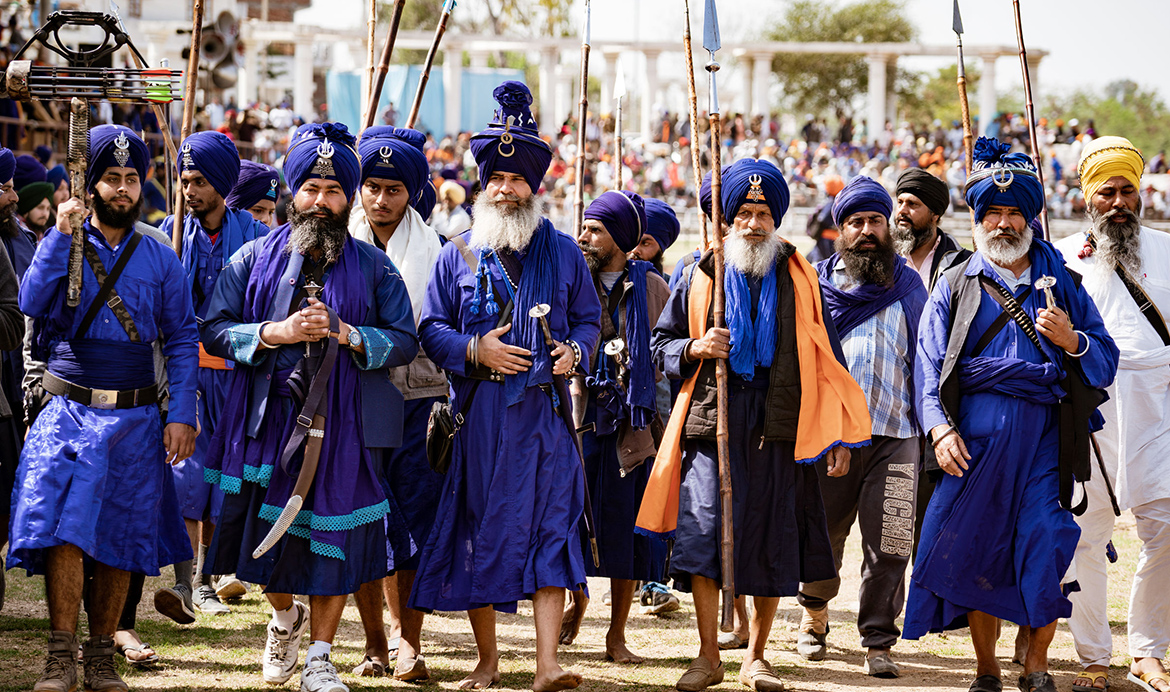 A tribute to the fearless Sikh warriors and inimitable Sikh heritage, Hola Mohalla takes Holi celebrations to a new level altogether. The holy town of Anandpur Sahib in Punjab hosts this annual fair which was started by Guru Gobind Singh almost three centuries ago. Watch in awe as the participants display stupendous martial arts, acrobats, weaponry and mock fights. And when you are in Punjab, there’s no way you can resist staying at a farmhouse and splurging on the fresh farm produce.

Celebrations might differ in style and traditions, but the ultimate goal of unadulterated fun is achieved as you decide a Holi-day at one of these places. 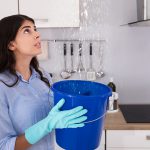 Previous Post Berger’s Homeshield RoofKoat – #BuildStrongHomes
Next Post Thinking of painting your house? Here's everything you need to know 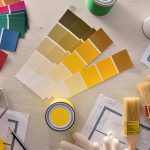